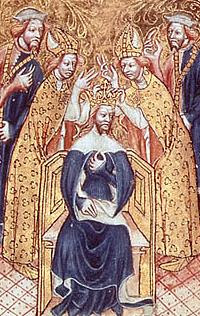 The archbishop of Canterbury put the questions before the king was crowned; and, after he had given his oral responses, he personally swore on the altar that he would keep all his promises.

"Sire, will you grant and keep and by your oath confirm to the people of England the laws and customs given to them by the previous just and god-fearing kings, your ancestors, and especially the laws, customs, and liberties granted to the clergy and people by the glorious king, the sainted Edward, your predecessor?" "I grant and promise them."

"Sire, will you in all your judgments, so far as in you lies, preserve to God and Holy Church, and to the people and clergy, entire peace and concord before God?" "I will preserve them."

"Sire, will you, so far as in you lies, cause justice to be rendered rightly, impartially, and wisely, in compassion and in truth?" "I will do so."

"Sire, do you grant to be held and observed the just laws and customs that the community of your realm shall determine, and will you, so far as in you lies, defend and strengthen them to the honour of God?" "I grant and promise them."

(French) Statutes of the Realm, I, 168
Edward II's coronation oath demonstrates the barons' distrust of Edward from the beginning. Edward was thus compelled to accept an addition to his coronation oath in which the king swore that he would observe 'the rightful laws and the customs which the community of the realm shall determine.' The interpretation of the oath has led to much debate concerning who constituted the 'community of the realm' and how it was to choose or decide.

In their declaration at Boulogne in January 1309, the barons quoted the controversial clause of the coronation oath to reinforce their demand that Gaveston be exiled—the king they said being bound by his oath to obey their decision. I suspect the enemies of Gaveston knew full well they had an ace up their sleeve with these new provisions in the coronation oath. They need only await the proper moment to make their demands. The moment was not long in coming.

'The doctrine of capacity' declared that homage was not due to the king in person but only to the crown as an institution. The Declaration distinguished between the person and the office of ruler to justify violent opposition to one if it was in the best interests of the other, and stressed the barons' loyalty to the crown.

The Ceremony and Banquet:

The Pauline annalist, claiming to be an eyewitness, gives a vivid impression of Edward’s coronation ceremony. According to his story there was some problem about the barons’ carrying of the regalia of St. Edward by virtue of their “ancient service,” since these were relics that only clergy should handle. As for the choice of Gaveston to carry the crown, this predictably aroused indignation among laymen and clerics alike. The press of people was so great that a strongly constructed internal plaster wall collapsed, bringing down in its wake the high altar together with the royal staging, and crushing to death a certain knight, John de Bakewell, who on account of his reputation as an “enemy” of the monastery was accorded little sympathy by the chronicler. In consequence the ceremonies were concluded with irreverant haste.

The same source records that the subsequent banquet, which continued late into the night, was likewise mismanaged. There was a superabundance of food but insufficient supervision of its distribution. Worse still, the banquet gave occasion for conflict. Gaveston sought to outshine the king himself by appearing in purple garments resplendent with pearls. One of the earls wished to reprove him in public but was urged not to spoil the feast by creating a disturbance. Their day would come, he was told. As for the queen’s uncles, perceiving that the king preferred Gaveston’s couch to that of the queen they returned with great indignation to France.

They were an interesting 'bunch' alright...I have some data on them from my Legacy program posted on my website:
pixleyblair.tribalpages.com
Eleanor of Aquitaine is one of my favorite ancestors...a real 'uppity women'...love it!

Forgot to add what a great site it was...love my 'grandmother' Eleanor of Aquitaine-a real 'uppity woman'!
(troypix)
website:
pixleyblair.tribalpages.com

Thanks for the nice compliments. I've not been working at the blog much of late--a breakthrough in my family history research occured since my last entry. This particular "new" lineage links me to Capt. Philip Nelson of Rowley, MA, who has multiple descents from four of the sons of Edward III.

Alianore of Aquitaine is a great example of a powerful woman who was able to manipulate the feudal powerbase to her advantage (most of the time, anyway). She has been called the "Grandmother of Europe" for her tireless efforts in arranging favorable marital alliances for her many grandchildren. Her success in this regard can be measured by her numerous progeny--there are many millions of us.

Hi everybody, here is a new novel about King Edward II of England, and a website dedicated to an exciting new archival research project aimed at discovering the truth about how he really died. The novel comes highly recommended by Kathryn Warner.