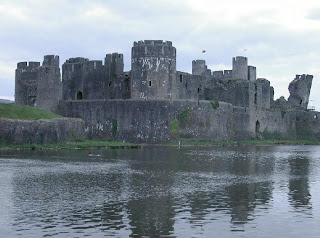 Elizabeth de Burgh (1295-1360), "Lady of Clare" (Domina Clare), niece of Edward II, ranked among the higher nobility. Youngest daughter of Gilbert de Clare and Joan of Acre (daughter of Edward I), she was co-heiress, with her two sisters (Eleanor and Margaret), to one-third of the inheritance of the Clare earls of Gloucester. Married in 1308 to John de Burgh, oldest son of the earl of Ulster, Elizabeth was widowed in 1313. Their son, William, the last earl of Ulster, was killed in Belfast in 1333, leaving a daughter, Elizabeth.

The death at Bannockburn of her childless brother, Gilbert de Clare, meant that Elizabeth came under considerable pressure from fortune hunters as well as her uncle, Edward II, who, under medieval law, controlled the rights to her marriage. This attraction seems to have been the reason for her runaway marriage in 1316 to Thebaud (Theobald) de Verdun, who is alleged to have abducted her from Bristol Castle. Theobald denied this charge, stating that he had been betrothed to Elizabeth in Ireland and that she willingly came out to meet him at Bristol. The marriage lasted five months, Theobald dying in July 1316 at Alton Castle, Staffordshire. Nonetheless, their brief union produced an only daughter (ancestor of this author), Isabel de Verdun, born at Amesbury in Wiltshire in March 1317.

Elizabeth married for a third time to Roger Damory, who, condemned to death as a traitor by Edward II in 1321, though soon pardoned, died in March 1322 without heirs. Elizabeth now entered a period of long widowhood; her status as a widow was assured by her canny decision to take religious vows while still a young woman. This strategy allowed her to escape the fate of another arranged marriage, while at the same time allowing her complete control of her vast estates.

The "Lady of Clare" died in November 1360, age 65, at the Minoresses Convent, Aldgate, London. Some sources erroneously claim that Elizabeth was buried beside her third husband at St. Mary's, Ware, Hertforshire; however, her will shows that she was buried at the Minoresses Convent, originally inside the Abbey Church. By the 16th century, her tomb had been moved to the Cloister [Medieval London Widows, p. 44]. By the provisions of her will, dated 25 Sept. 1355 at Clare, Elizabeth, re-founder of "Clare Hall" in 1338, further endowed the Hall (now Clare College, Cambridge) with money, plate, and books. A year before her death, Elizabeth wrote the statutes of Clare Hall:

Preamble to the Statutes of the Foundress, 1359

Elizabeth de Burgh, Lady of Clare, to all children of Holy Mother Church who read these words: greeting and remembrance of our deed! Experience, the universal guide, plainly shows that learning is no mean advantage in every rank of life, ecclesiastical or civil. Though many people seek it in many ways, it is best acquired in a recognised university community; and when its pupils have acquired it and tasted its sweets, it sends them out well qualified to rise according to their merits to different ranks in church and state. But so many men have been swept away by the ravages of the plague that learning has lately suffered a sad decline in numbers. We, therefore, desiring to assist true religion and to further the public good by promoting learning so far as God has put it in our power to do so, have turned our attention to the University of Cambridge in the diocese of Ely, where there is a body of students. Our purpose is that through their study and teaching at the university they should discover and acquire the precious pearl of learning, so that it does not stay hidden under a bushel but is displayed abroad to enlighten those who walk in the dark paths of ignorance. And to enable the scholars residing in our said college to live in harmony under the protection of a firm discipline and so enjoy greater freedom to study, we have with the advice of experts made certain statutes and ordinances, set out below to stand in perpetuity.
[Clare College History, http://www.clare.cam.ac.uk/about/history.html]
Dugdale, in his Baronage of England (London: 1675), v. 1, pp. 474-75, transcribes and extracts portions of Elizabeth's substantial will:

She bequeathed her body to be buried in the Monastery of Nunns, called Minoresses, without Aldgate, in the Suburbs of London; and gave a Legacy of an hundred and forty pounds to pray for the Souls of Sir John de Burgh, and Sir Theobald de Verdon her former Husbands; as also for Sir Roger Damorie, her last Husband; and all her honest servants which were either dead, or should die in her service; and this to be done with all possible speed after her decease. Moreover she gave an hundred marks to five Souldiers, who would be content within seven years next after her decease, to make a journey to the Holy-Land, for the service of God, and destruction of his Enemies. And likewise farther bequeathed to those Minoresses without Aldgate, twenty pounds in money, with a Relique of Christal, a great Chalice of Silver, gilt; and two Cruets; one Vestment of white Cloath of Gold, with what belonged thereunto, three Clasps, with a thousand Pearls; and a Robe of Russet, with its appurtenances. Furthermore, to her Daughter Elizabeth Countess of Ulster, she gave all the debt, due from her Son, Father to the said Elizabeth, at the day of his death. To her young Daughter Isabel Bardulf, a Cup of Gold; To Agnes her Sister's Cross of Silver: And to the Countess of Atholl, her Daughter, two Beds of Tauney.