Illustrated from the tomb of Edward III

First duke of Clarence, second surviving son of Edward III.  Rumored to have been poisoned, it is more likely that Lionel died as a result of too much good living, eating and drinking: "His great riot and wynes delicacie, His Ghoste exilled from his corse doubtless" [Notes and queries, 7th series, vol. 9; London: Jan-June 1890, p. 482].

Lionel Duke of Clarence, in the house of the Duke of Milan, in the city of Alba, the 3d of October 1368.  My body to buried in the Church of the Friars Augustines at Clare, in the County of Suffolk; to Violenta, my wife, my vestments with gold coronets; to John de Bromwich, Knt. my courser called Gerfacon; to  Richard Musard, Knt. a girdle of gold and a courser called Maugeneleyn; to John de Capell, my chaplain, a girdle of gold, to make a chalice in memory of my soul; and to the said John my best portiforium (1) with musical notes; to Master Nicholas de Haddeley a small portiforium, without notes; to John Wayte, my chaplain, a portiforium, with notes; to Thomas Waleys a circle of gold, with which my brother and Lord was created Prince (2); to Edmund Mone the circle with which I was created Duke; to Nicholas Bekennesfeld x marks a year out of the manor of Bremsfeld.  And I appoint Violenta, my wife; Bartholomew Pigot, and John de Capell, my chaplain; and Sir John de Bromwich, Knight, my executors.  In the presence of Nicholas de Bekennesfeld, Robert Bradway, John Bray, and others.  Proved before William Archbishop of Canterbury 6 ides of June 1369, at Lambeth [Testamenta Vetusta, 1:70-71].
-----------------------------------------
(1) A book of the prayers, hymns, psalms, and readings for the canonical hours; a breviary
(2) Edward the Black Prince

Final resting place of Lionel, duke of Clarence, at the ruins of Clare Priory, Suffolk.  Buried on his right side is Lionel's 1st wife, Elizabeth de Burgh [Findagrave]: 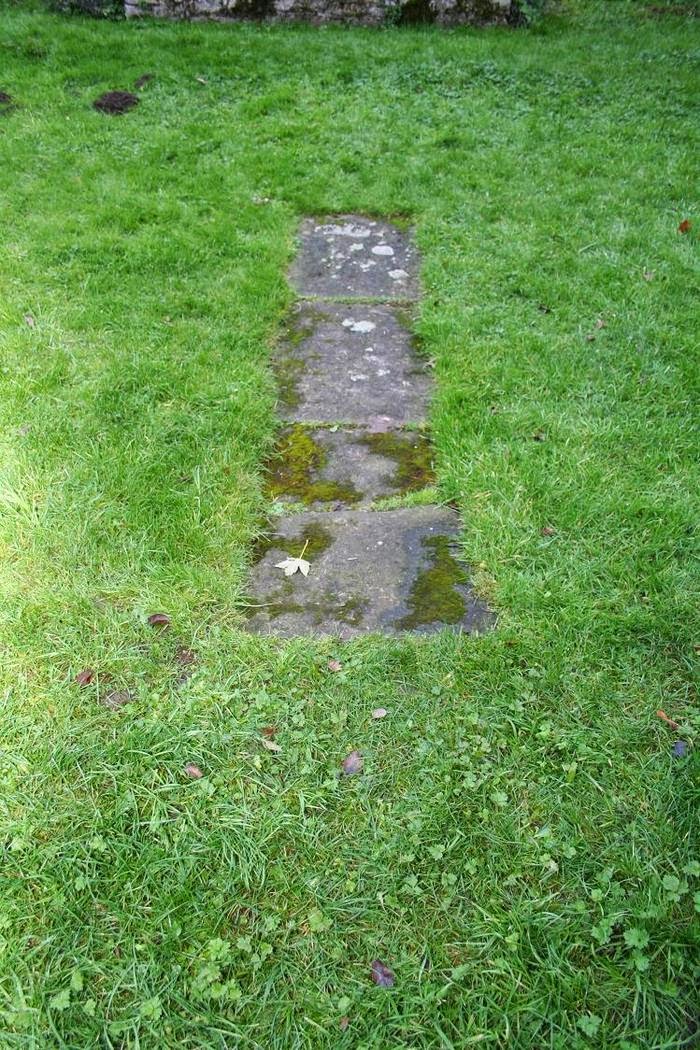 The Reburial of Richard III

By now, many of you are undoubtedly aware that human remains found buried underneath a car park last September in the city of Leicester, England have been confirmed this week to be the body of King Richard III.  Here is an image of the mostly intact skeleton of the last of the Plantagenet kings.  The severity of his lateral scoliosis (curved spine) is easily observed. 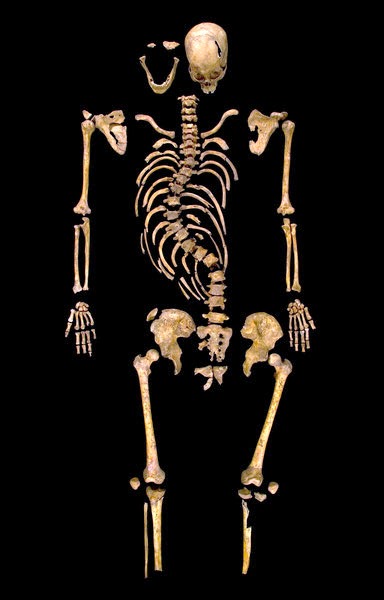 Leicester took charge of the remains, and in the end, he was buried there.

Richard should have been given a respectful and honored reburial in York Cathedral.  It is what he would have wanted: Richard endowed a chantry at York and visited many times, stating his intention for burial there.

Richard's rule and person was systematically maligned by the Tudor dynasty (the victor always gets to write the history); Shakespeare picked up the mantle and embellished the myths of the monstrosity of Richard.  Now, perhaps, history will re-examine Richard's reign and produce a more balanced view.

King Henry III coming to hunt in a forest (since called White Hart) in Dorsetshire, took several deer.  Finding a most beautiful and goodly white hart there he spared it: but afterwards a gentleman of the County called Thomas de Lynd, with others in his company, took and killed this white hart.   For which the King put a fine on him and the whole County, called the White Hart Silver.  [Henry Curzon, The universal library or compleat summary of science (1712), 1:352]

The fine was still being paid into the Exchequer at the time of Elizabeth I.

BLACKMOOR-VALE, the valley of the Cale river, on the mutual border of Somerset and Dorset; south south-eastward from Wincanton toward Sturminster. It is flanked by hill ranges, often 4 miles asunder; and has a rich, tenacious, marshy soil, notable as pasture land, and for the vigorous growth of oaks. It was originally called White Hart forest, from an incident in a hunt by Henry III.   Source: A vision of Britain through time; online at: http://www.visionofbritain.org.uk/place/place_page.jsp?p_id=25968 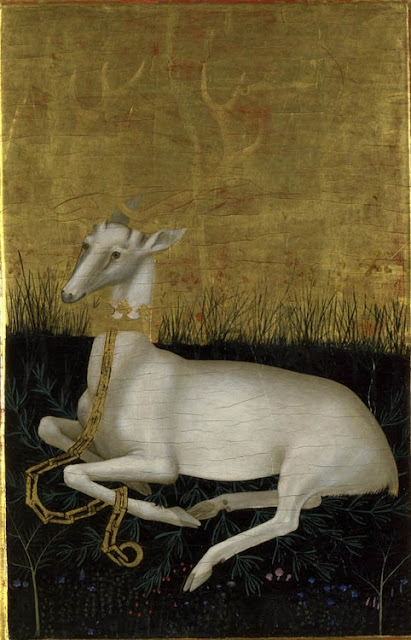 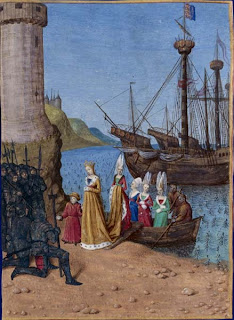 A Letter to Their Father, from the Sons of Richard, Duke of York 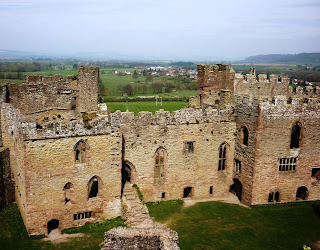 Ludlow Castle in Shropshire.  Residence of the family of Richard, Duke of York [1411-1460].  The stairs in the foreground lead to the Great Hall.
Edward the Fourth when Earl of Marche, and his brother the Earl of Rutland, to their father, Richard, Duke of York, about the year 1454.  Edward would then have been in his 12th year, and Edmund in his 11th [ms. Cotton. Vksp. F. in. fol 9. Orig.]:
Ryght hiegh and ryght myghty Prince, oure ful redouted and ryght noble lorde and ffadur, as lowely with all oure herts as we youre trewe and naturell sonnes can or may, we recomaunde us un to your noble grace, humbly besechyng your nobley & worthy ffaderhode daily to yeve us your hertely blessyng: thrugh whiche we trust muche the rather to encrees and growe to vertu, and to spede the bettur in all matiers and things that we schall use, occupie, and exercise. Ryght high and ryght myghty Prince, our ful redouted lorde and ffadur, we thanke our blessed Lorde not oonly of your honourable conduite and good spede in all your matiers and besynesse, and of your gracious preuaile ayenst the ntent & malice of your evilwillers, but also of the knowelage that hit pleased your nobley to lete us nowe late have of the same by relacion of Syr Watier Deureux knyght, and John Milewatier squier, and John at Nokes yemon of your honorable chambur.
Also we thonke your noblesse and good ffadurhod of our grene gownes nowe late sende unto us to our grete comfort; beseching your good lordeschip to remembre our porteux, and that we myght have summe fyne bonetts sende un to us by the next seure messig, for necessite so requireth. Overe this, ryght noble lord and ffadur, please hit your highnesse to witte that we have charged your servant William Smyth berer of thees for to declare un to your nobley certayne things on our behalf, namely coicernyng and touching the odieux reule and demenyng of Richard Crofte and of his brother. Wherefore we beseche your graciouse lordeschip and full noble ffadurhood to here him in exposicion of the same, and to his relacion to yeve ful feith and credence. Ryght hiegh and ryght myghty Prince, our ful redoubted and ryght noble lorde and ffadur, we beseche almyghty Jhu yeve yowe as good lyfe and long with as muche contenual perfite prosperite as your princely hert con best desir. Writen at your Castill of Lodelowe on Setursday in the Astur Woke.
Your humble sonnes
E. Marche and E. Rutlonde
Sir Henry Ellis: Original Letters, Illustrative of English History [London: 1824], 1:9-10.
Posted by Kevin at 4:32 PM 2 comments:

The Lady and the Unicorn 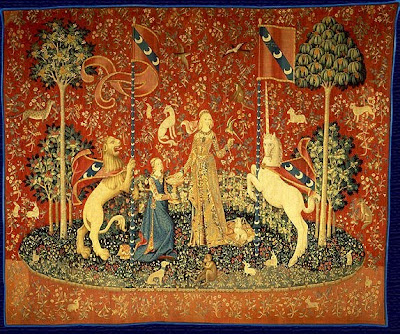 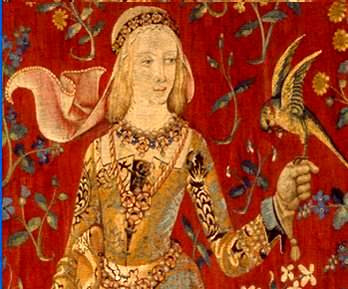 "The Lady and the Unicorn" (French: La Dame à la licorne), also called the Tapestry Cycle, is the title of a series of six Flemish tapestries depicting the senses. They are estimated to have been woven in the late 15th century in the style of mille-fleurs.

The lady depicted in the tapestry called Taste, is conjectured to have been Blanche of Lancaster (1345-1369), 1st wife of John of Gaunt, Duke of Lancaster. Blanche was the daughter of Henry of Grosmont, 1st Duke of Lancaster and his wife, Isabel de Beaumont. Her paternal great-great-grandfather was Henry III of England. Dying of the plague in 1369, Blanche was said to have had blue eyes, fair hair and skin, and a calm and serene demeanor. She was living in Bolingbroke Castle at the time of her death, while her husband was away. Her funeral at St. Paul's Cathedral in London was preceded with a magnificent cortege attended by most of the nobility and clergy. John of Gaunt held annual commemorations of her death for some years thereafter.
Though some scholars disagree, it is widely held that Gaunt's grief over the death of his duchess was immortalized by Chaucer in his work, The Booke of the Duchess.  See:  http://omacl.org/Duchess/
In the tapestry, the lion and the unicorn frame the Lady who, eyes turned towards a parrot in her right hand, is taking a sweet from the candy dish offered to her by her servant. Her little dog follows her every move; at her feet a leering monkey, eating a berry or a candy, highlights the significance of the scene.
Blanche's daughter, Elizabeth (wife of John Holand, 1st Duke of Exeter), is an ancestor of my "gateway" forebear, Capt. Philip Nelson of Rowley, Massachusetts.
Source: Musee de Nationale de Moyen Age,
http://www.musee moyenage.fr/ang/pages/page_id18314_u1l2.htm
Posted by Kevin at 8:13 PM No comments:

Richard II, Dining with the Dukes of York, Gloucester and Ireland. Circa 1386 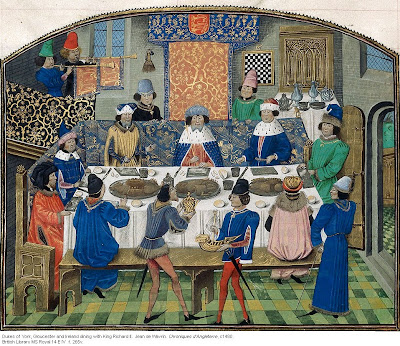