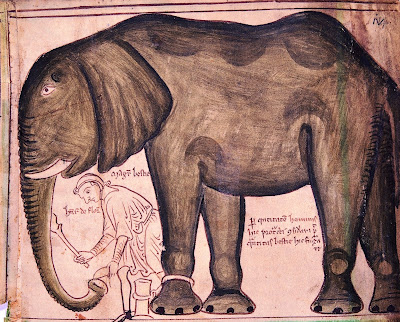 An African elephant arrived at Whitsand, on the coast of England, in late November 1254, a gift from the king of France, Louis IX, to Henry III of England. The elephant was said to have been acquired by Louis during a crusade to Palestine. A mandate in the Close Rolls, dated 7 January 39 Henry III (1255), orders the Sheriff of Kent “with John Gouch, to provide for bringing the King’s elephant from Whitsand to Dover, and if possible to London by water” [The New York Times, 11 June 1882].

A royal menagerie was established at the Tower of London in 1235, when Henry III received a wedding gift of three leopards from Frederick III, Holy Roman Emperor. Henry was presented a bear in 1246 by the mayor of Northampton. A Norwegian polar bear joined the menagery in 1252; it was controlled by a muzzle attached to an iron chain and, when secured by a strong rope, was allowed to catch fish in the Thames.

In 1255, Henry ordered elaborate arrangements to be made for the accommodation of his elephant at the royal menagerie in the Tower of London. “We command you,” he wrote to the Sheriff of London, “that ye cause without delay, to be built at our Tower of London, one house of forty feet long and twenty feet deep, for our elephant.”

Matthew Paris (1200-1259), a Benedictine monk of St. Alban’s Abbey, said of the beast, “We believe that this was the only elephant ever seen in England.” He drew the animal twice; the illustration posted here shows the elephant being fed by its keeper, “Henricus de Flor.”

In 1258, about three years after it began its captivity in the Tower, the elephant died—apparently the result of being given too much red wine to drink. Additionally, the chilly climate and cramped quarters likely did nothing to ensure the creature's longevity.

I have a photo of an Essex Cathedral misericord, taken September 2007. The carving is of an elephant in the center, and a man and woman on the sides. (Henry III and Isabella of Provence, my guess.) The explanatory sign was that it may commemorate the Henry III elephant. Here's the image in my Webshots album of effigies and memorials: http://image63.webshots.com/663/5/31/18/2046531180084119722GOoyrp_ph.jpg

I'm a Plantagenet descendant, too. I found your blog from the Edward II blog comments. I'll bookmark your blog and read it as I find time. Thanks for your scholarship and sharing, Cousin!

Thanks Christy for sharing the photo of the carving, it's a great addition to my blog entry. That it survived for so many centuries is amazing.

What is your lineage to the Plantagenets? I have identified six of my American colonial ancestors who have links to this fascinating family. If you have a particular Plantagenet that you'd like to see a blog entry for, I'd be happy to oblige.

Kevin, if you'll provide an email address, I'll send you the digital image of the misericord, plus the signage next to it. You can reach me at: editornado (at) gmail (dot)com. (Trying to avoid the crawling/trawling spammers.)

I'm an Arizona native surviving in southern California, who can't get enough of the UK. I can't afford the vacation expense this year, with the dollar worth less than half a pound.

My first Plantagenet gateway family was Plumpton of Yorkshire, whose descendant, Sgt John Plympton, was burned by Canadian Indians. The Plumptons had Neville ancestors (from Katherine Roet/John of Gaunt), and the rest is history! If you read Sharon Kay Penman, pretty much every character is my direct ancestor. On my mom's side, it's all English and Norman. On my dad's side, a lot of Scots (and their Norman overlords), Welsh (royalty), and a sprinkling of Dutch who married the English separatists taking refuge in Leyden and Amsterdam.

I chuckled at your statement (somewhere) that it's difficult to choose sides when reading history, as they're ALL your forebears. I've thought that since I was a teen, reading town records about my Massachusetts colonials whose grandchildren would later marry; and as recently as last September, when I saw a letter between Llywelan and Henry III, regarding the unseemly behavior of Gilbert de Clare -- all three are ancestors.

My last Plantagenet was John of Gaunt, and his daughter Joan Beaufort.

As for your taking requests: I haven't read enough of your blog yet to know who you've covered. But the women always get less playtime, so maybe Philippa, Isabella Angouleme-Plantagenet-Lusignan (she's mine from both unions). Or a royal bastard, such as William Longespee (Ida some-thing-Bigod/Henry II).

Thanks. You're welcome. Email me.
Christy

Fascinating! I'm really enjoying your blog. Just came across it while search for my Plantegenet roots from Joseph Bolles (1608-1678). My blog is located at http://familyhistory.wordpress.com

Great to hear from you and thank you for the nice comment.

I looked at your blog and noted the section on Bolles from Douglas Richardson's book. This leads the reader to Henry III, but as you know, the immigrant Bolles descends from Edward I and his 2nd wife, Marguerite of France ("le Hardi").

This Edward I descent, though lacking the nice details in Richardson's tome, is more clearly laid out in Gary Roberts' _Royal Descents of 600 Immigrants_, and it's a line we share in common, down to John de Mowbray, 4th Lord Mowbay (slain 1368 at Thrace) & his wife, Elizabeth de Segrave. This couple are my 21st great-grandparents, so we are perhaps on the order of 22nd cousins. Thank goodness for modern genealogy software, it can figure things out in a jiffy!

Hello, thank you for the picture and explanation. I'm an English teacher in Korea, teaching high school seniors :) I was preparing for the next reading class and I found a short paragraph about Matthew Paris. Your blog helps me a lot and definitely my students, too. I'm going to share this page with my students. Thank you so much again!